About me: Trampoline Performance Coach and retired Army Captain. Former National Level trampoline competitor in the UK and Billy all sports, 31 years young.

WHY: 2016 saw a lot of injury and the last part leading to Christmas I had a broken wrist resulted in limited exercise and a noticeable amount of weight gain (to me) and definition Loss. I use sugar to get through the day as I coach solidly for up to 6 hours at a time. My skin is bad and I have diet related gastro problems which I know is down to a poor eating habits. I blooming love a pudding, this girl can eat chocolate cake quicker than Bruce Bogtrotter.

Worries: My job is extremely active, I bounce at least 2 hours a day, not including fitness classes and my own exercise. I am nervous of 'diets' due to eating disorders as a teen and in my early 20's and worry that a massive change will lead to obsession and a return of previous issues.

Week 1: Firstly, how the HECK am I 25% body fat, that crept up on me... I work Saturdays and have to miss the seminars so the initial email on Friday helped to prepare for day 1. I started on the Friday evening and the food was not too bad. However my first issue, I do not like Avocado, cucumber or celery... so that limited my initial options for lunch. I must admit the Facebook group is great for ideas and different options for recipes. I got through Sunday fairly well and felt (albeit tired) alright. Monday was the first stupid idea... Bootcamp... I was dizzy, struggled in strength and the old army mentality of 'just get on with it' came through. My body is a machine, oh wait no it's not it doesn't want to work for me at all. Headache for the rest of the day and although smashed a staple lunch of spinach wrap, with chicken and bacon I was still hungry. I just couldn't find the energy so avoided prep that night ate my Shepard’s pie from the freezer and thought I'd go for a 'Daily Cut' for lunch... FAIL I am a bit of a nightmare with lettuce that isn't crisp and after the journey to work I managed to heave for about 5 mins trying to eat broccoli, before giving up and just eating the chicken. All I managed Tuesday was eggs and salmon for breakfast, chicken breast for lunch and ham as a snack. I did eat a pre-made Shepard’s pie for dinner at 10pm and then prepped like a mad person for the rest of the week... I WILL NOT BE DEFEATED and actually after Wednesday morning trampoline fitness and a busy schedule for the rest of the week with hands on coaching I survived.  Only as a result of preparation!  the 7P's spring to mind.... Went to the cinema with a pack of whole kitchen seeds and a water bottle, I tend to belt feed a large sweet popcorn bag before the movie starts so for me this is a Result!! Drinking water is not a problem, I tend to drink lots anyhow but a skinny cappuccino with a sweetener has been missed that's for sure.

Week 2: Yay for tomatoes! Oh wait I don't eat tomatoes either. The first meal was roasted veg (mainly green) with Carrots and peppers, they tasted extremely sweet after the sugar purge. I feel like I'm savouring the flavours. After the lessons learnt from week 1, I am prepared and even Managed a jog on Sunday evening. I am still feeling a little Low on energy at times and have succumbed to become one of those people who buys protein. I made protein balls with cacao for a hit while at work between bouncing. Only taken 31 years and needs must. Clothes feel looser, skin is becoming clearer and stomach has settled. My Tuesday from last week was a whole lot different this week. Prepped a decent 'big' lunch and snacks, finished work at 8 and went straight to Hockey training. A year out and you could tell, but I managed to run around like a lunatic for 1.5 hours. Finished the week very stiff and continued with being busy at work. Sleep has been an issue with cramp and just not settling, so invested in Magnesium supplements which has been brilliant. I went to a BBQ and ate so much meat. Took green pepper and carrot sticks with me and soda, watching everyone having a few drinks was slightly annoying but stuck with it. I have managed to 'accidentally' fast for 3 days this week after the seminar on Wednesday as I do not start work until late so actually it's not too bad to wait for lunch. Other than sleep being a pain towards the tail end of the week a much better week for energy... I didn't feel the need to eat quite a lot of the time.

Week 3: OVER HALFWAY!!! Survived 50% and looking forward to adding some sweet potato and beetroot to the diet. Went for a slow and steady 4.6 Mile jog as Since Hockey training my legs have been very sore. Actually had a protein shake and feel ok for it. Preparing hard on the Sunday for the week as it's set to be a busy one. Consciously upping the exercise this week as with the added carbs I hope I can take it. Monday bootcamp I had much more energy and no dizziness. Managed to push myself harder and wasn't 'at the back', body is aching but fueling well. I may have found a faux pas CASHEW BUTTER seriously the restraint not to devour the whole pot is tremendous. But I have made my protein balls using this for a second batch and actually since the revelation I haven't dived a in with a teaspoon since the first few days of having it.

You can't always plan ahead, being reactive is important and A busy week at work has resulted in only managing my own exercise (other than bouncing) 2 times. But had 2 trampoline fitness classes to deliver and also sporting a slight strain from Too many lunges from Bootcamp and Hockey at the start of the week so some rest is probably needed... stuck to the plan and even resisted my boss's Husband placing a glass of red wine in front of me (he must have thought I needed it) I refused, it smelt so good but restraint (for once) stood strong. Awesome compliments from the parents of the kids I coach saying how great I look and how incredible my skin is, a brilliant boost to enforce the effort going into sticking to the plan.

Week 4: WOW how is it the last week already.?!? Start as you mean to go on, 9 hours solid coaching on Saturday and an impromptu trip to my boss's meant a late run. But I am slowly increasing speed and the first run since the start that I haven't wanted to collapse. Obstacle Bootcamp Sunday morning and again feeling good, weirdly satisfying burning your legs and working your arms up on ropes, how I miss that part of the Army... I prepared food for the week in a form of curry for lunches when I'm too busy and also making sure I don't forget that green should be the staple. I'm finding myself less hungry but feeling like I 'should' eat for the sake of not overdoing the diet and not fueling myself properly. Finding the balance I Guess will be important this week... I have lots of exercise planned and want to really work hard to find my fitness while maintaining a Clean and Lean diet. Also CHEESE... my hand brake. Just need to remember to alternate days as otherwise overindulgence is inevitable. The True protein from UFIT Amoy Street (chocolate flavour) has not only stopped my need for the sweet tooth but dare I say it aided in the recovery process and also general aches and pains after exercise. From a non-believer in protein powder, I am converted and it will definitely form part of my recovery and exercise routine. With only 3 days before my weigh out, I have managed a good amount of exercise and also learnt lots about what I do and don't need with regards to food, I am a little sporadic in my food choices after exercise as most of the time I do not eat dinner until after work at 10pm opting quite a lot of the time for snacks rather than a meal, which means a big lunch but I'm ok with that as an option to go forward... Another brilliant Wednesday seminar to help with the final push and feeling positive about the changes to make afterwards. Also picked up some shorts to wear to work and have had to roll them up as they are falling down. Jumping on a trampoline today may add some hidden entertainment, never a dull moment. Typical the day before I weight out I'm having a wobble, feel like scrounging around the kitchen to look for something sweet... hoping today flies by without too much stress... so you can't control hormones and the last bit one day out from weigh in has resulted in my body playing up. But I am sticking to it, support from friends and UFIT's own Lizzie Wright has been helpful as sometimes you just need a kick up the butt. Even managed a 5k run in quickest time since before my wrist break in October so something must be going ok.

The weigh out: After the last day of feeling pretty bad (although staying true) I didn't have much hopes and could not believe it when I jumped on the scales and the first number was 56!! 56KG is below my pre-army 'fit' weight and I was truly shocked. I know I've felt good at times and many have complimented the way I'm looking which has been nice, but to actually see the hard work in facts and figures gives you that measurable outcome to the process. 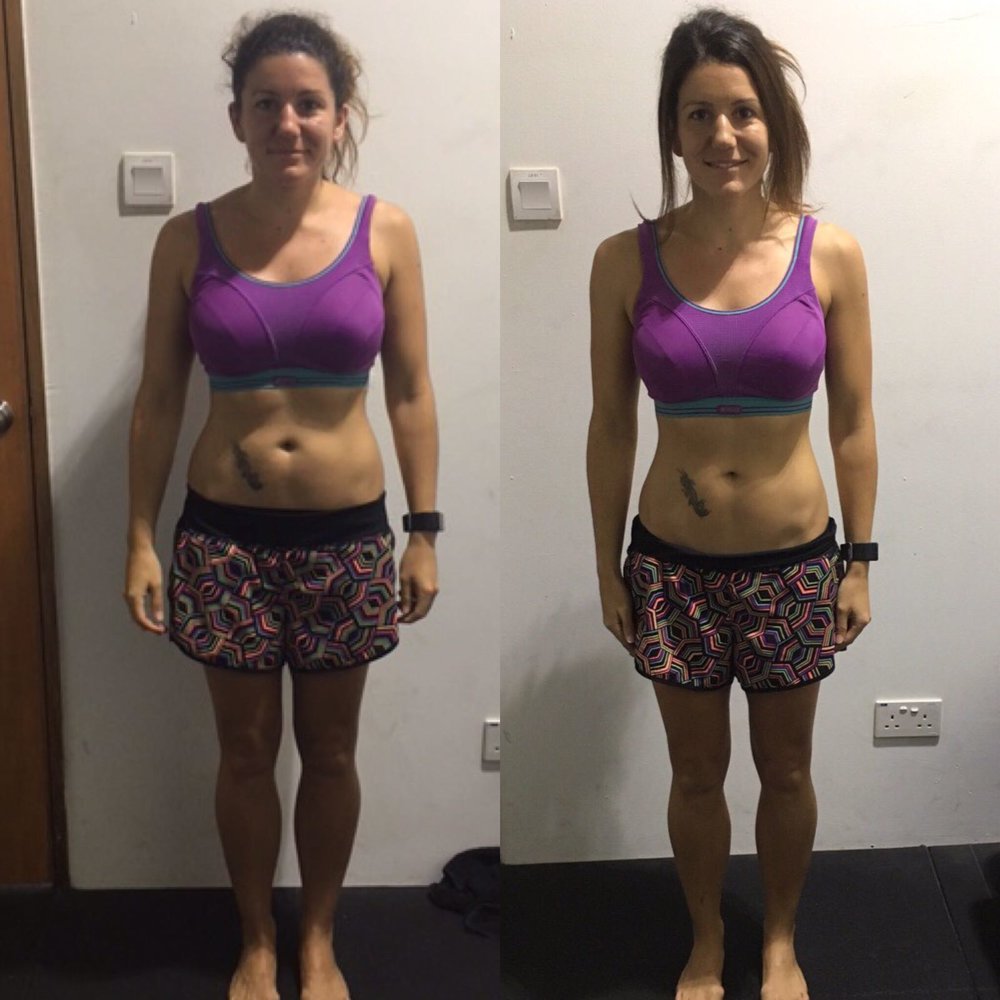 Reflection:  So in 4 weeks I have lost 4.5KG, 4.5% body fat and also 5cm from my waist, my skin has massively improved and I have slowly managed to control my hunger and need for sugar. I have found myself in a place where I am really happy with how I feel and look. The energy is starting to come back because of careful planning in food preparation and I am feeling confident about keeping with it and trying to build back into the Athlete I once was. I fully recommend the clean and lean process to those who do not just want to lose weight but for those who want an education about how to take control of your diet and not be a slave to the evolution of poor eating and poor diet choices. It's all about moderation and for me my process will continue with the odd cheat day here and there. Thank you UFIT and especially Wendy and Noa for the support and guidance over the last 4 weeks, also the community Facebook group has been awesome. Safe to say I'm converted to be Clean and Lean for 90% of the time, no one likes a goody too shoes after all. 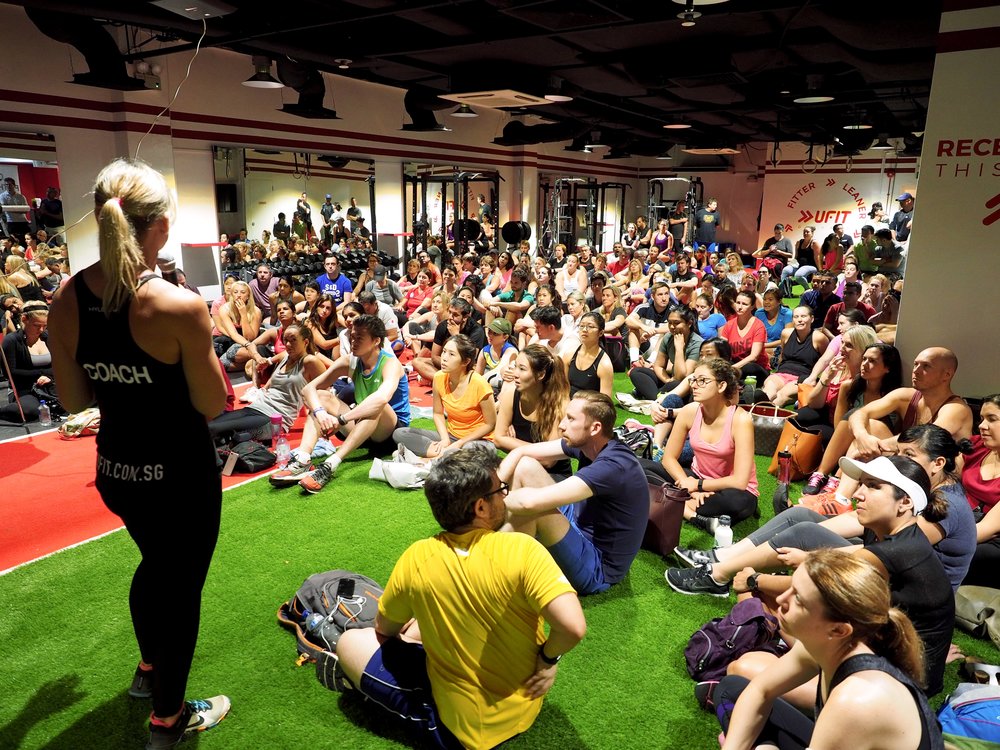 UFIT is Singapore’s largest independent fitness community that offers a 360 approach to health and fitness island wide. For more information, visit our website.