The modern diet is the main reason why people all over the world are fatter and sicker than ever before. Everywhere modern processed foods go, chronic diseases like obesity, type 2 diabetes and heart disease soon follow.

The studies are clear on this… when people abandon their traditional foods in favor of modern processed foods high in sugar, refined flour and vegetable oils, they get sick (1, 2, 3). Of course, there are many things that can contribute to these health problems, but changes in the diet are the most important factor.

Here are 11 graphs that show everything that is wrong with the modern diet.

1. Total Sugar Intake Has Skyrocketed in The Past 160 Years 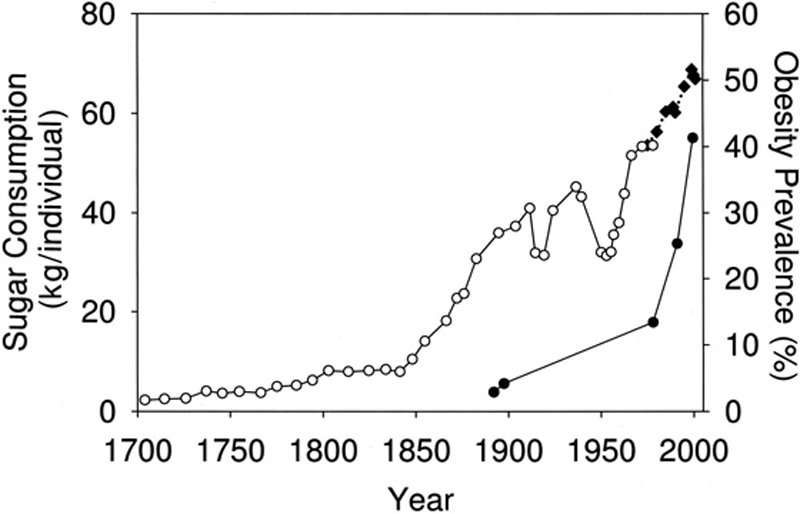 People in Western countries are consuming massive amounts of refined sugars, reaching about 150 lbs (67 kg) per year in some countries. This amounts to over 500calories of sugar per day.

The sources vary on the exact figures, but it is very clear that we are consuming way more sugar than our bodies are equipped to handle (4). Controlled human studies show that large amounts of sugar can lead to severe metabolic problems, including insulin resistance, metabolic syndrome, elevated cholesterol and triglycerides — to name a few (5, 6).

Added sugar is believed to be one of the main drivers of diseases like obesity, type 2 diabetes, heart disease and even cancer (7, 8, 9, 10).

2. Consumption of Soda and Fruit Juice Has Increased Dramatically

Of all the sugar sources in the diet, sugar-sweetened beverages are the worst. Fruit juice is actually no better… it contains a similar amount of sugar as most soft drinks (11).

Getting sugar in liquid form is particularly harmful. The studies show that the brain doesn’t “register” liquid sugar calories the in the same way as calories from solid foods, which dramatically increases total calorie intake (12, 13). One study found that in children, each daily serving of sugar-sweetened beverages is linked to a 60% increased risk of obesity (14)..

3. Calorie Intake Has Gone up by Around 400 Calories Per Day 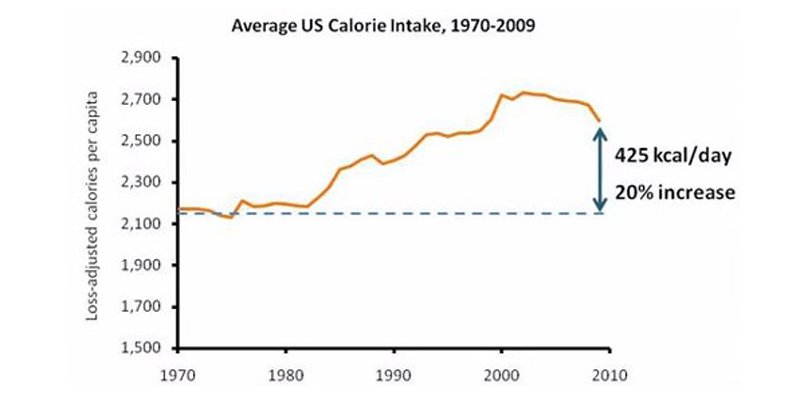 Although sources vary on the exact figures, it is clear that calorie intake has increased dramatically in the past few decades (15).

There are many complicated reasons for this, including increased processed food and sugar consumption, increased food availability, more aggressive marketing towards children, etc (16). 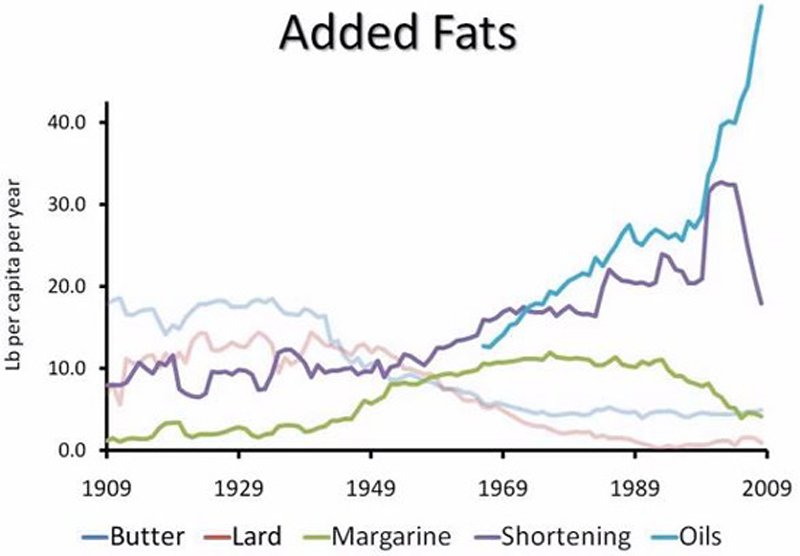 These oils are very high in Omega-6 fatty acids, which can contribute to inflammation and various problems when consumed in excess (17, 18). These oils are often hydrogenated, which makes them high in trans fats. Many studies have shown that these fats and oils actually increase the risk of heart disease, even if they aren’t hydrogenated (19, 20, 21).

Therefore, the misguided advice to avoid saturated fat and choose vegetable oils instead may have actually fueled the heart disease epidemic. 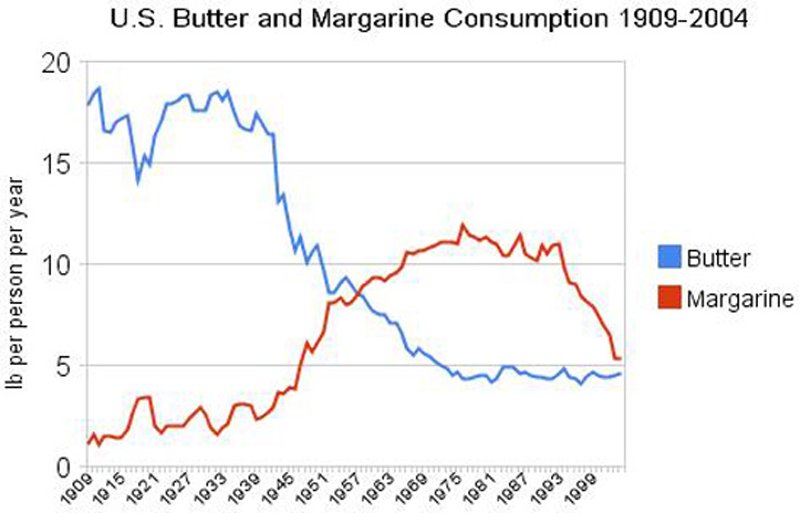 Another side effect of the “war” on saturated fat was an increase in margarine consumption.

Margarine was traditionally made with hydrogenated oils, which are high in trans fats. Many studies show that trans fats increase the risk of heart disease (22, 23).

Grass-fed butter actually contains nutrients that are protective against heart disease (likeVitamin K2), therefore the advice to replace heart-healthy butter with trans-fat laden margarine may have done a lot of damage (24).

6. Soybean Oil Has Become a Major Source of Calories

The most commonly consumed vegetable oil in the U.S. is soybean oil. Soybean oil actually provided 7% of calories in the U.S. diet in the year 1999, which is huge (25)!

However, most people don’t have a clue they’re eating this much soybean oil. They’re actually getting most of it from processed foods, which often have soybean oil added to them because it is cheap. The best way to avoid soybean oil (and other nasty ingredients) is to avoid processed foods.

7. Modern Wheat is Less Nutritious Than Older Varieties of Wheat 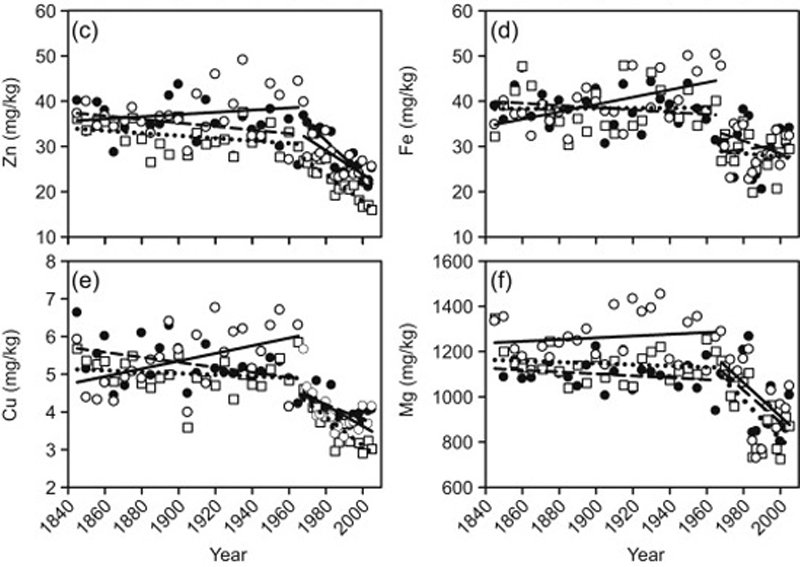 Journal of trace elements in medicine and biology

Wheat is a major part of the Western diet. It is found in all sorts of foods… breads, pastas, pastries, pizzas and various processed products.

However… wheat has changed in the past few decades.

Modern dwarf wheat was introduced around the year 1960, which contains 19-28% less of important minerals like Magnesium, Iron, Zinc and Copper. There is also evidence that modern wheat is much more harmful to celiac patients and people with gluten sensitivity, compared to older breeds like Einkorn wheat (26,27, 28).

Whereas wheat may have been relatively healthy back in the day, the same is not true of modern dwarf wheat.

8. Egg Consumption Has Gone Down 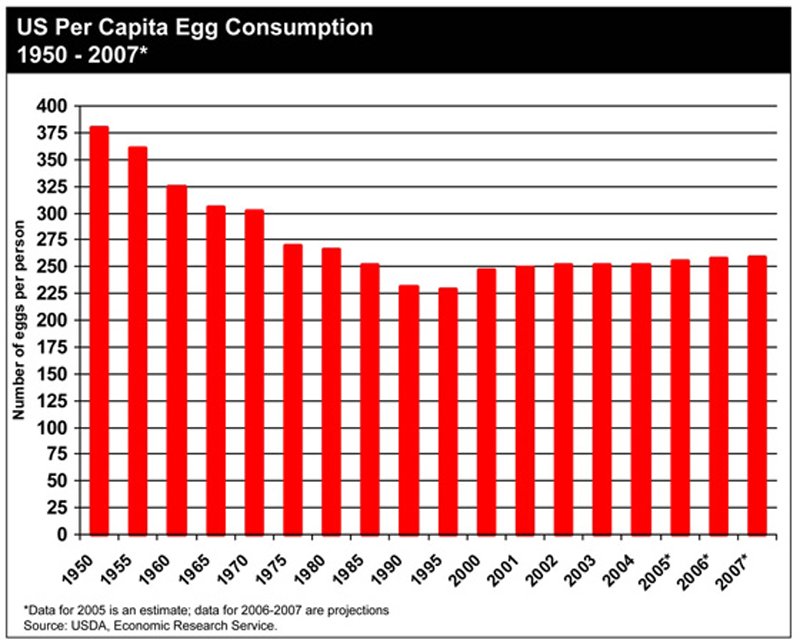 Eggs are among the most nutritious foods on the planet. Despite being high in cholesterol, eggs don’t raise the bad cholesterol in the blood (29).

For some reason, the health authorities have recommended that we cut back on eggs, even though there is no evidence that they contribute to heart disease (30). Since the year 1950, we have decreased our consumption of this highly nutritious food from 375 to 250 eggs per year, a decrease of 33%.

This has contributed to a deficiency in important nutrients like Choline, which about 90% of Americans aren’t getting enough of (31).

9. People Are Eating More Processed Foods Than Ever Before 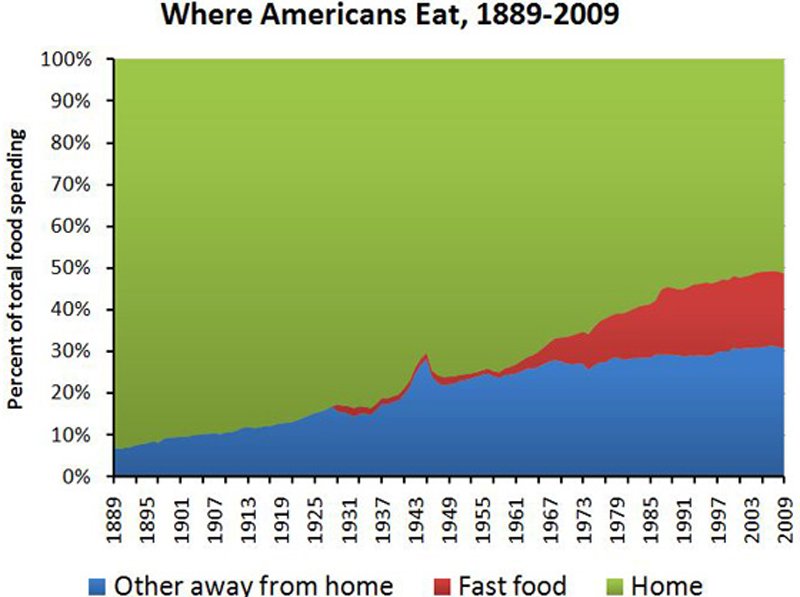 This graph shows how consumption of fast foods has increased in the past few decades.

Keep in mind that even though it looks like people are still eating most of their foods “at home&” — this does not take into account the fact that most people are also eating processed, pre-packaged foods at home.

10. The Increased Vegetable Oil Consumption Has Changed The Fatty Acid Composition of Our Bodies 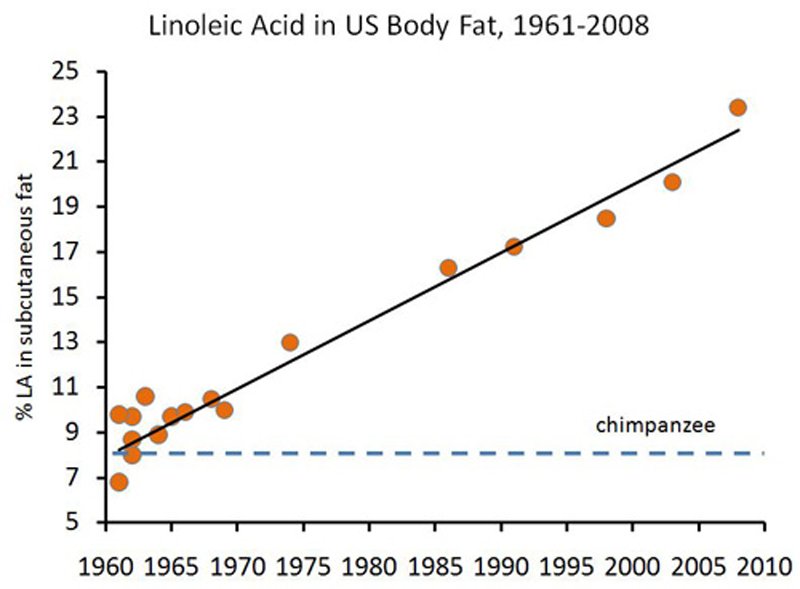 Most of the Omega-6 fats that people are eating is a fatty acid called linoleic acid.

Studies show that this fatty acid actually gets incorporated into our cell membranes and body fat stores. These fats are prone to oxidation, which damages molecules (like DNA) in the body and may be increasing our risk of cancer (32, 33, 34, 35, 36).

In other words, the increased consumption of processed vegetable oils has lead to actual harmful structural changes in our bodies. That’s a scary thought.

11. The Low-Fat Dietary Guidelines Were Published Around The Same Time The Obesity Epidemic Started

The first dietary guidelines for Americans were published in the year 1977, almost at the exact same time the obesity epidemic started. Of course, this doesn’t prove anything (correlation does not equal causation), but it makes sense that this could be more than just a mere coincidence.

Since the guidelines were published, many massive studies have been conducted on the low-fat diet. It is no better at preventing heart disease, obesity or cancer than the standard Western diet, which is as unhealthy as a diet can get (37, 38, 39, 40).

For some very strange reason, we are still being advised to follow this type of diet, despite the studies showing it to be completely ineffective.