The Sour Facts about Milk. 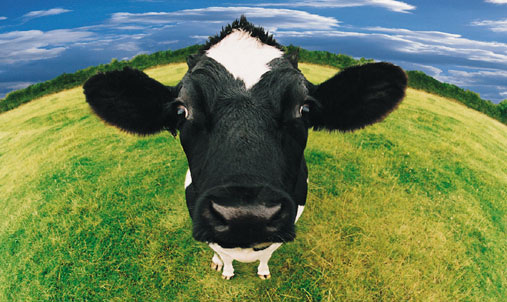 Over the past 40 years, the dairy industry has poured billions of dollars into advertising campaigns designed to mesmerize, lure, and frighten individuals into consuming their products. Their frosted fingers have steadily tightened their steely grip of influence over educational institutions, retirement homes, hospitals, and doctor’s offices; permeating magazines, books, journals, and commercials with biased information that promotes their agenda. After years of mind-numbing “mustaches” of manipulation, we now assume that dairy products are a natural and normal part of the human diet. However, this is far from the truth.

Like all female mammals (including humans) who produce milk for their young, a female cow secretes milk that is intended to nurse her baby calf for about one year. This fatty hormonal secretion (containing over 60 hormones and growth factors) is designed to take her 65 pound newborn calf and turn him into a 700-pound cow in less than one year — quite a feat!

During pregnancy, a cow’s estrogen level skyrockets over 30 times higher than when she’s not carrying a calf. Since today’s factory dairies pump milk from female cows continually to increase profits, higher hormone levels (both naturally occurring and those created by agribusiness) are found in dairy milk, which also happens to be disastrously high in fat; a critical factor further exacerbating increased estrogen levels in humans.

When children are handed this hormonal cocktail masquerading as a magical health elixir, their undeveloped bodies are flooded with milk’s massive amount of estrogen, leading to an epidemic of precocious puberty. Additionally, children end up consuming sub-therapeutic doses of antibiotics in every glass of milk.

A cow’s udders can become unnaturally distended from being forced to produce thousands of extra gallons of milk per year, making them drag on the ground. Most concrete dairy lots are paved with piles of bacteria-laden manure. The fecal matter contaminates her udders, causing infections (mastitis), and is one of the reasons antibiotics are routinely administered to dairy cows.

Another dangerous constituent in cow milk is insulin-like growth factor 1 (IGF-1). When humans consume this hormone, their IGF-1 levels also increase, accounting for the “growth” effects of cow’s milk. Unfortunately, if breast cancer cells or prostate cancer cells are exposed to IGF-1, they proliferate like weeds, leading to disease at an alarming rate. Curiously, this critical information is never included in dairy promotional literature.

Since the beginning of time, countless cultures have thrived without a drop of “ivory syrup.” How did the native populations of Hawaii survive without cow milk before the introduction of cattle in 1793? The same way that native people of Mexico did before cattle was introduced in 1521. Many people around the world have never seen a cow, let alone drank her hormonal secretions. Large populations worldwide have been flourishing without bovine milk for eons. Consuming cow milk is highly unnatural; there is no animal in nature (other than humans) that drinks the milk of another species naturally. Giraffes don’t hound lactating goats for a sip of milk, and horses don’t run to nurse on pigs’ teats; the mere thought seems ludicrous.

Leading pediatricians such as Dr. Benjamin Spock (also an influential and best-selling author of parenting books) and Dr. Jay Gordon have been strong proponents of a dairy-free diet for children. The Physicians Committee for Responsible Medicine (PCRM), a non-profit organization whose members include 150,000 health professionals, has always been adamantlyopposed to cow milk consumption.

When the Journal of Clinical Nutrition surveyed all accredited medical schools in the US in 2006 about their nutritional curriculums, they found that of the responding 106 schools, on average, medical students received close to 24 hours of nutrition education. Some received none. Their conclusion was that the amount of nutrition education in medical schools was “inadequate.” That’s quite an understatement. A hair dresser receives more training before cutting clients’ hair professionally, yet parents are taking advice from individuals with hardly any unbiased nutritional education?

Medical schools are highly influenced by the agribusiness industry. Agribusiness continues to target pediatricians offices with marketing campaigns designed to push their highly manipulative ideology, so it’s hardly surprising that many well-meaning pediatricians are ill informed about the dangers of dairy products. Expecting to receive meaningful, objective, and impartial nutritional advice in an environment influenced by dairy and agribusiness interests leads to predictable recommendations to consume dairy at all health costs.

Thankfully, many parents are waking up to the truth about dairy products and seeking healthier alternatives. Rice, almond, hemp, and coconut milks are good choices for many kids and adults. These can be easily enjoyed with whole grain cereals, oatmeal, and creamy soups. One of my favorite methods of boosting kids’ (and adults’) nutrient consumption is to use nut or rice milks in smoothies; adding sweet, fresh, juicy whole fruits and greens such as kale, spinach, or leafy lettuce, and blending them for a tasty drink. Leafy greens are better sources of minerals than dairy products. The dietary fiber found in fruits, vegetables, whole grains, and beans also assists with escorting estrogen out of the body. Many greens contain not just generous amounts of calcium, but additional nutrients critical for building bone health, such as magnesium, boron and vitamin C. Being physically active is also important for building bones, and is one more reason to get the kids off the couch and on the playground.

Just as no loving parent would allow her small child to play on busy highways, dairy products should be approached with extreme caution given the amount of information readily available about their dangers. As parents, we have the responsibility to research and educate ourselves about the food choices we offer our children. They count on us wholeheartedly for looking out for their best interests. Helping children avoid dairy products is one of the most loving, caring, and responsible actions a parent can take for their child, themselves, and for building a healthier world.