Sugar is the new 'TOBACCO'.

Front page of todays Daily Mail telling you what UFIT have been saying for years now that sugar is the enemy!

Sugar is ‘the new tobacco’: Health chiefs tell food giants to slash levels by a third

Food giants are being told to cut the amount of sugar they use because it has become the ‘new tobacco’.

Doctors and academics say levels must be reduced by up to 30 per cent to halt a wave of disease and death.

They found that even zero-fat yoghurts can contain five teaspoons of sugar, while a can of Heinz tomato soup has four.

Doctors and academics say levels must be reduced by up to 30 per cent to halt a wave of disease and death.

The equivalent of 11 teaspoons are found in a small Starbucks caramel Frappuccino with whipped cream. A Mars bar has eight.

‘Sugar is the new tobacco,’ said Simon Capewell, professor of clinical epidemiology at the University of Liverpool.

‘Everywhere, sugary drinks and junk foods are now pressed on unsuspecting parents and children by a cynicalindustry focused on profit not health.

The obesity epidemic is generating a huge burden of disease and death.

Obesity and diabetes already cost the UK over £5billion a year. Without regulation, these costs will exceed £50billion by 2050.’ 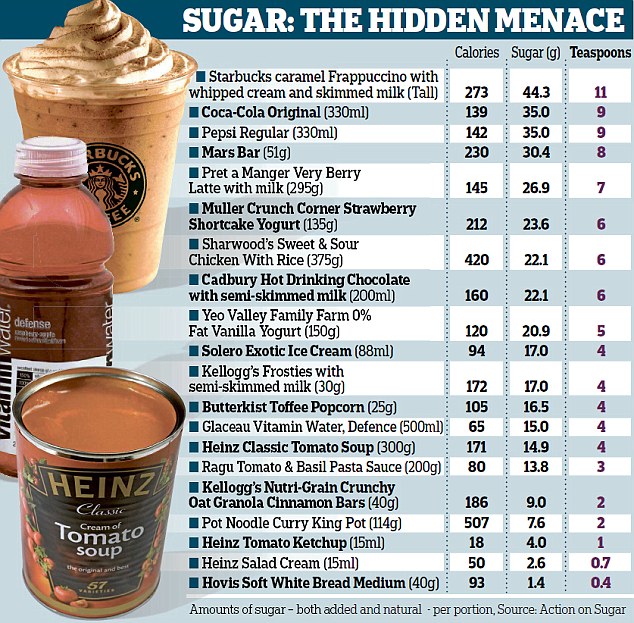 Doctors found that even zero-fat yoghurts can contain five teaspoons of sugar, while a can of Heinz tomato soup has four.

Professor Capewell is part of a new US-UK campaign group – Action on Sugar – that says asking firms to make voluntary changes has failed.

The typical Briton consumes 12 teaspoons of sugar a day and some adults consume as many as 46.

The maximum intake recommended by the World Health Organisation is ten, although this guideline is likely to be halved.

The UN agency says there is ‘overwhelming evidence coming out about sugar-sweetened beverages and other sugar consumption’ being linked to obesity, diabetes and cardiovascular disease.

A study by Action on Sugar found surprisingly high levels of sugar in many foods, including savoury products and healthy options.

Sweet: A Mars bar has eight teaspoons of sugar while a tin of Heinz tomato soup has four

Even Glaceau Vitamin Water, which is owned by Coca-Cola, has the equivalent of four teaspoons of sugar in a 500ml bottle.

Action of Sugar said food firms should be able to reduce the amount of sugar they add to products by 20 to 30 per cent within three to five years, taking 100 calories a day out of the typical diet.

This would be enough to halt or even reverse rising levels of obesity and associated ill-health, it claimed.

Graham MacGregor, a professor at the Wolfson Institute of Preventive Medicine in London and chairman of Action on Sugar, said: ‘We must now tackle the obesity epidemic both in the UK and worldwide.

‘We must start a coherent and structured plan to slowly reduce the amount of calories people consume by slowly taking out added sugar from foods and soft drinks.

‘This is a simple plan which gives a level playing field to the food industry, and must be adopted by the Department of Health to reduce the completely unnecessary and very large amounts of sugar the food and soft drink industry is adding to our foods.’

Dr Aseem , the group’s science director, said: ‘Added sugar has no nutritional value whatsoever, and causes no feeling of satiety. 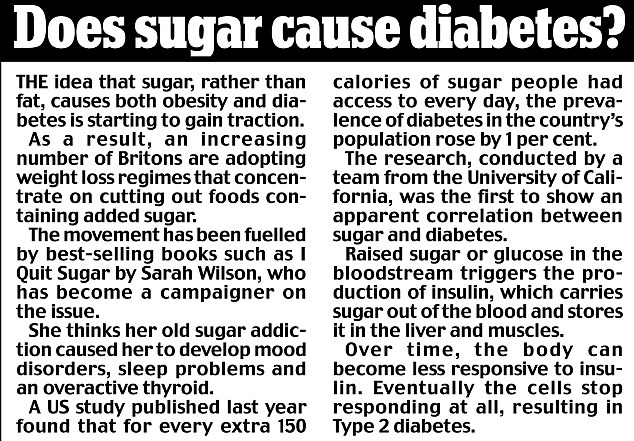 ‘Aside from being a major cause of obesity, there is increasing evidence that added sugar increases the risk of developing type 2 diabetes, metabolic syndrome and fatty liver.

‘We must particularly protect children from this public health hazard and the food industry needs to immediately reduce the amount of sugar that they are adding, particularly to children’s foods, and stop targeting children with massive advertising for high calorie snacks and soft drinks.’

But sugar manufacturers rejected the claims of the health experts saying they were not supported by the consensus of scientific evidence.

Sugar Nutrition UK said the World Health Organisation published a review last year that found that any link between diabetes and body weight was due to overconsumption of calories and was not specific to sugar.

It said: ‘There have also been numerous studies, which have investigated potential links between sugar and diabetes, with experts from the British Dietetic Association, European Food Safety Authority, and Institute of Medicine being very clear that diabetes is not caused by eating sugar.

Respected expert committees have reviewed the evidence over many years and all have concluded that the balance of available evidence does not implicate sugar in any of the so-called lifestyle diseases.’

And Barbara Gallani, of the Food and Drink Federation, an industry group, also denied sugar was responsible for obesity.

‘Sugars, or any other nutrient for that matter, consumed as part of a varied and balanced diet are not a cause of obesity, to which there is no simple or single solution,’ she added.

Professor Shrinath Reddy, a cardiologist at the Harvard School of Public Health and member of the WHO panel of experts, disputed this conclusion.

He said there was ‘overwhelming evidence coming out about sugar-sweetened beverages and other sugar consumption links to obesity, diabetes and even cardiovascular disease’.

Yoni Freedhoff, assistant professor of medicine at the University of Ottawa, said sugar needed again to become an occasional treat rather than a regular ‘crutch’.

He said that added sugar had found its way into virtually everything we eat.