Interesting article in the WSJ , not to be taken literally but interesting all the same!

The Exercise Equivalent of a Cheeseburger? 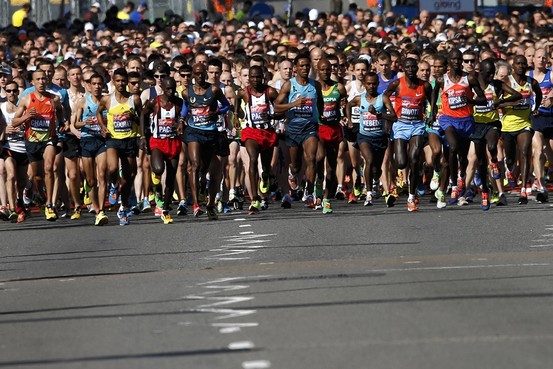 Runners at the London Marathon in April Reuters

Over the last few months, during the endurance-athletics off-season, something extraordinary happened: The line began to blur between the health effects of running marathons and eating cheeseburgers.

“I’m not worried,” says veteran running coach Mark Sullivan, who has run more than 150 marathons, joking that “there are guys who live to be 100 smoking cigarettes and eating cheeseburgers.”

Endurance athletes have long enjoyed a made-of-iron image. But amid mounting evidence that extraordinary doses of exercise may diminish the benefits of modest amounts, that image is being smudged. That extra six years of longevity running has been shown to confer? That benefit may disappear beyond 30 miles of running a week, suggest recent research.

The improved blood pressure, cholesterol levels and robust cardiac health that exercise has been proven to bestow? Among extreme exercisers, those blessings may be offset partially by an increased vulnerability to atrial fibrillation and coronary-artery plaque, suggest other recent studies. 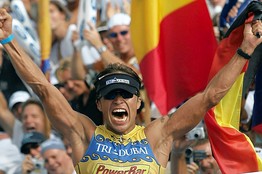 In the face of this research, long-standing skepticism about the possibility of “exercise overdose” is softening among many sports physicians. “The lesson I’ve learned from 40 years of cardiology is that when there’s this much smoke, there’s often some fire,” said Paul Thompson, a sports-medicine specialist and veteran marathoner who is chief of cardiology at Hartford Hospital in Connecticut.

Anecdotal concerns about endurance athletics have been building for years. Cardiac conditions that required surgery have forced into retirement two winners of the Ironman Triathlon World Championship. In 2011, Ironman winner Normann Stadler underwent emergency surgery to repair an enormous aortic aneurysm, a condition not caused but very possibly aggravated by endurance athletics. Research shows an association between endurance athletics and enlarged aortic roots.

Other recent studies suggest the significant mortality benefits of running may diminish or disappear at mileage exceeding 30 miles a week and other, very small studies have shown elevated levels of coronary plaque in serial marathoners—a problem that rigorous exercise theoretically could cause.

“Heart disease comes from inflammation and if you’re constantly, chronically inflaming yourself, never letting your body heal, why wouldn’t there be a relationship between over exercise and heart disease?” said John Mandrola, a cardiac electrophysiologist and columnist for TheHeart.org.

Yet sports-medicine specialists are sharply divided over whether any warning is warranted. For every American who exercises to extremes, after all, there are thousands who don’t exercise at all—and who might embrace any exercise-related warnings as cause for staying sedentary. Moreover, the evidence for extreme-exercise hazards is far from conclusive—and is contradicted by other studies suggesting the health benefits of exercise may accrue to infinity.

“It’s true that the majority of cardiovascular protection comes from exercise at more moderate levels, but there is compelling evidence that there’s no upper limit,” said Benjamin Levine, director of the Institute for Exercise and Environmental Medicine in Dallas and professor of medicine at the University of Texas Southwestern Medical Center.

“I don’t want anyone to read that exercise can be bad for you. added Mandrola, a passionate cyclist. “Some folks do tons of exercise and are protected. Some folks probably have some individual susceptibility to it. I’m a big believer in short intervals of high intensity.”

Sports medicine has a history of ignoring warning signs. Long after evidence emerged that over-hydrating could prove fatal to marathoners, experts continued encouraging runners to drink as much as possible—leading to utterly preventable tragedies such as the death of a 43-year-old mother of three in the 1998 Chicago Marathon. “Why did it take 20 years before the original evidence was accepted?” asked a 2006 article in the British Journal of Sports Medicine.

Following the recent emergence of studies finding high levels of coronary plaque in marathon runners, sports medicine is debunking the myth that distance running confers near-absolute protection against heart disease. “The thinking used to be, if you’re a marathoner, you’re protected,” said Thompson. While taking seriously the growing evidence for potential risks of endurance exercise, Thompson said he isn’t advising his patients against it. “As a former marathoner, I have a sympathetic bent toward large amounts of exercise.”

Publicizing the potential dangers of endurance exercise could give recreational athletes an argument for resisting pressure to go longer and harder. Within the running and triathlon communities, glory is often reserved for those who go extreme distances. “The longer you go, the more attention people pay to you,” said Aaron Baggish, a triathlete, marathoner and Massachusetts General Hospital cardiologist.

The loudest voice warning about the dangers of endurance exercise may be that of James O’Keefe, a sports cardiologist and former elite triathlete. In his late 40s, O’Keefe started experiencing heart palpitations following heavy workouts. He now believes the culprit was unrelenting exercise. An article he co-wrote last year in the Mayo Clinic Proceedings said: “Long-term excessive endurance exercise may induce pathological structural remodeling of the heart and large arteries.”

As director of a decadeslong project called the National Runners’ Health Study, Paul Williams has published dozens of scientific articles showing that running—the more the better—confers a variety of robust health benefits. But along with Hartford’s Thompson, Williams just completed a study of 2,377 runners and walkers who had survived heart attacks. Over 10.4 years, 526 of them died, 71.5% of them from cardiovascular disease. What Williams found is that the more they ran or walked after a heart attack, the less likely they were to die of heart disease—until they exceeded 7.1 kilometers of running or 10.7 kilometers of walking daily.