7 Claims in Grain Brain That Will Blow You Away. 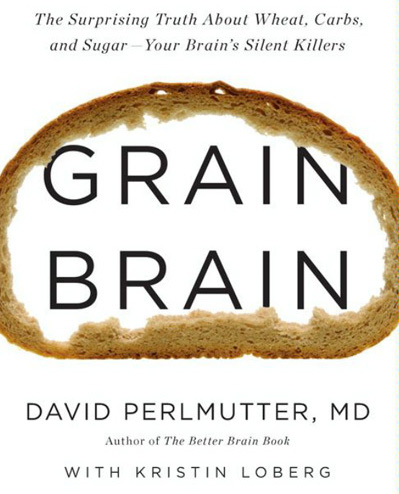 Are carbs slowly destroying our brain? Renowned neurologist David Perlmutter thinks so, and he’d like to explain why in his comprehensive New York Times best seller,Grain Brain. While devouring this absorbing, 300-page nutritional odyssey, two points became abundantly clear: whoever reads this book will never look at food the same way again, and I’m hungry.

Despite possessing a title that sounds right at home nestled between Hop on Pop andOne Fish Two Fish Red Fish Blue Fish, Grain Brain is all business, as Dr. Perlmutter makes a compelling case that we can treat, and in some cases totally eliminate, common neurological ailments simply by changing our diets. You just may agree after reading these 7 captivating claims fromGrain Brain:

This first point is both alarming and a fantastic point to make when attempting toYogi Bear a particularly delectable turkey club away from a health-conscious friend. Grain Brain asserts that the fate of our brain does not rest in our genes, but rather in the food we consume—and not just the usual suspects. We’ve all heard about the potential problems caused by white flours, pastas and rice, but even so-called healthy grains like whole wheat can not only wreak havoc on your brain, but accelerate your body’s aging process.

According to Dr. Perlmutter, inflammation, the cornerstone of all degenerative conditions—including brain disorders—can be triggered by carbs, especially those high in sugar or containing gluten.

2. There’s an increasing number of studies confirming a link between gluten sensitivity and neurological dysfunction

Grain Brain clearly states that gluten sensitivity represents one of the greatest and most under-recognized health threats to humanity.

Ugh. Stop being so dramatic, BREAD.

As many as 40% of us can’t properly process gluten, but, the germane question, according to Dr. Perlmutter, is: What if we’re all sensitive to gluten from the perspective of the brain? This can be especially troubling considering gluten sensitivity can be “primarily, and at times exclusively, a neurological disease,” meaning people with gluten sensitivity can have issues with brain function without having any gastrointestinal problems whatsoever.

3. An extremely low-carb and high-fat diet is what your body fundamentally craves and needs

If gluten is persona non grata, what types of food should we allow past that velvet rope we call a mouth?Grain Brain describes fat as “our brain’s secret love,” which we find equal parts adorable and delicious.

Dr. Perlmutter notes that our bodies thrive when given “good fats,” including cholesterol, and we shouldn’t equate eating fat with being fat. Obesity has almost nothing to do with dietary fat consumption and everything to do with our addiction to those sweet, sweet carbs.

While this may not be the most scientific nomenclature, Grain Brain is basically pro cholesterol and anti carbohydrates. In fact, the book notes that innumerable studies have demonstrated that depression runs much higher in people who have low cholesterol.

The science Grain Brain implements to reinforce this claim is that carbohydratesare converted to glucose, which tells the pancreas to release insulin into the blood. Insulin production leads to fat production, fat retention, and a reduced ability to burn fat, or what they (probably) call it in the science biz: the trifatca.

Carbs also stimulate an enzyme that tends to drive fat into the cells, while a low-carb diet tends to decrease blood sugar in diabetics and improve insulin sensitivity, which generally results in weight loss.

5. The more overweight you are, the smaller your brain

This admittedly sounds like a poorly conceived schoolyard insult, but science generally calls it like they see it.

Dr. Perlmutter notes that other studies have confirmed that for every excess pound put on the body, the brain gets a little smaller. Furthermore, the bigger your waistline, the more at risk you are for headaches.

6. We can change the expression of more than 70% of the genes that have a direct bearing on our health and longevity

We don’t frivolously use a term like flabbergasted very often, but we were quite surprised when we read about our own control over gene expression.

Like we said, we don’t use the term flabbergasted often.

Grain Brain posits that the food choices we make, the quality of our sleep, the stress we experience, the exercise we get, and the relationships we choose determine to a significant degree which of our genes are active and which remain suppressed.

In a headline ripped straight from the Duh Gazette, exercise is good for you! We all know exercise can improve your physique, but what about your mental physique, aka your brain? When we workout, we literally exercise our genetic makeup.  According to New York Times science writer Gretchen Reynolds, “Exercise appears to build a brain that resists physical shrinkage and enhances cognitive flexibility.”

Exercise has been proven to induce growth of new neurons in the brain, and makes said neurons nimble and able to multitask. The exercise needn’t be exhausting to have a positive effect on the brain. Aerobic exercise that gets your heart pumping has been shown to reverse memory decline in the elderly and increase growth of new brain cells in the brain’s memory center.

Dr. Perlmutter provides plenty of food for thought throughout his comprehensive guide to a healthier lifestyle. At one point he advices that “if you do nothing else recommended in this book but eliminate gluten and refined carbohydrates, you will experience profound positive effects.”

Has Grain Brain changed the way you look at the food you eat?

Thanks to Barnes & Noble for this informative article